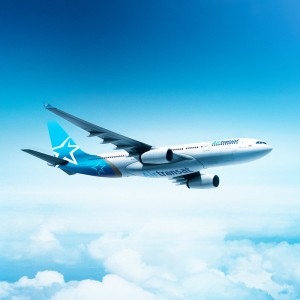 With 375 partners and guests in attendance, president and CEO Jean-Marc Eustache took the opportunity to unveil its new fleet livery and outlined plans for the creation of a new hotel division to remain “at the forefront of the travel industry.”

Transat’s new fleet livery is designed to reflect the recent evolution of the Transat brand image, while remaining faithful to the company’s promise “to brighten the everyday with the joy of vacations.”

The star symbol, emblematic of Transat, remains on the aircraft’s tail, the rear side fuselage and its wingtips. To mark the 30th anniversary, the design uses touches of grey, a nod to Air Transat’s very first livery. That livery features gradated shades of blue, to evoke the transformative power of holidays.

Finally, the Air Transat name appears on the side and underside of the fuselage, ensuring its visibility even when the aircraft is in flight.

Throughout its 30-year history, Transat has continued the vision of its founders—that of a leisure travel company open to the world. From its beginnings on November 14, 1987, when its inaugural flight took off from Montreal to Acapulco, Mexico, Transat now offers customers 60 destinations in two major markets—transatlantic (Europe and the Middle East) and South, out of 21 Canadian airports.

The airline also commercializes its flights to Canada in 13 European countries, as well as in Israel, the United States and at numerous sun destinations.