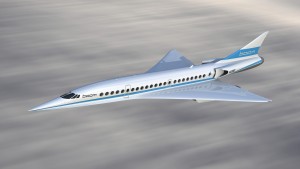 The Boom supersonic aircraft is slated for entry into service in the mid-2020s. Photo: courtesy JAL Airlines.

Boom is developing a new-generation Mach 2.2 supersonic airliner that will be economical enough to operate with business-class fares.

Through this agreement, JAL will provide its knowledge and experience as an airline to support Boom in developing the aircraft.

As part of the agreement, JAL has made a strategic investment of US$10-million in Boom and is collaborating with the company to refine the aircraft design and help define the passenger experience for supersonic travel.

JAL also has the option to purchase up to 20 Boom aircraft through a pre-order arrangement.

Founded in 1951, JAL now reaches more than 344 airports in 56 countries and regions together with its codeshare partners with a modern fleet of more than 230 aircraft.