San Francisco celebrates 50th Anniversary of the Summer of Love

By Editor on February 7, 2017 in San Francisco, Travel Features 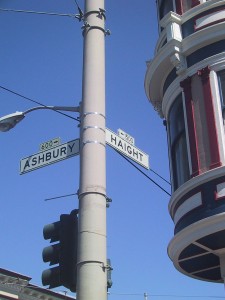 Junction of Haight and Ashbury Streets, San Francisco, celebrated as the central location of the Summer of Love.
By Nancy – Own work, GFDL, https://commons.wikimedia.org/w/index.php?curid=3869883.

Long stamped a literary bohemia and attracting nonconformists like the Beat Generation writers of the Fifties to musicians and artists and social rebels in the mid-to-late Sixties, it was logical that free-thinking San Francisco would give birth to a radical new movement eventually embraced by the rest of the world.

In 1967, nearly 100,000 free-spirited adventurers congregated in the Haight-Ashbury neighbourhood near Golden Gate Park to join a cultural revolution that created some of the era’s most memorable music, art, fashion and literature. Wearing flowers in their hair, people danced through the streets, promoting peace in a war-ravaged world.

Their legacy remains, and five decades later San Francisco will pay tribute to the 50th anniversary of the Summer of Love with a yearlong celebration that will include a 1960s throwback of exhibitions, performances, literary events, tribute concerts and recognition of significant moments in time.

Feb. 8-May 21, 2017—Hippie Modernism: The Struggle for Utopia at Berkeley Art Museum and Pacific Film Archive. Examines the art, architecture and design of the 1960s and early ‘70s counterculture. bampfa.org/program

June 24-Oct. 1, 2017—Flower Power at the Asian Art Museum. The Summer of Love in San Francisco conjures images of hippies frolicking in the park and rallying with daisies in their hair. To reveal the hidden histories and multi-layered meanings of florals across cultures, the Asian Art Museum presents an original exhibition of pan-Asian artworks and botanical imagery. “Flower Power” features gloriously gilded folding screens, unusually-modern lacquers, rare porcelains, religious sculptures, and contemporary installations of living plants and sensory-igniting multimedia. asianart.org/exhibitions

For flights and airlines that fly to San Francisco from YVR, visit yvr.ca.

Delta to fly rare B717 to YVR, starting summer 2017
Canadian coalition of lawyers and advocates staff airports to ensure immigrants with valid visas can get to the U.S.