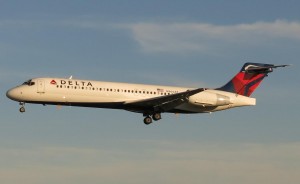 Delta’s Boeing 717 is a twin-engine, single-aisle jet airliner, developed for the 100-seat market.

It may not be hot off the assembly line or a next-gen aircraft like some of the more recent first-ever aircraft to land at YVR, but the Boeing 717 with its fascinating history will start making weekly flights between Vancouver and Los Angeles every Saturday starting this summer.

This will make it the first this time this rare bird will make its appearance on the runways of YVR.

The Boeing 717 is a twin-engine, single-aisle jet airliner that was designed and originally marketed by McDonnell Douglas as the MD-95 as part of the DC-9 family. The first order was placed in October 1995 by ValuJet Airlines (later AirTran Airways); McDonnell Douglas and Boeing merged in 1997 prior to production.

After McDonnell Douglas was acquired by Boeing in August 1997 some thought Boeing would cancel development of the MD-95, but Boeing went forward with the design under a new name, Boeing 717.

It appeared that Boeing had skipped the 717 model designation when the 720 and the 727 followed the 707, but the 717 name was the company’s model number for the KC-135 Stratotanker aircraft. The designator 717 had also been used to promote an early version of the 720 to airlines before it was modified to meet market demands.

A Boeing historian notes that the Air Force tanker was designated “717-100” and the commercial airliner designated “717-200”. The lack of a widespread use of the 717 name left it available for rebranding of the MD-95.

Boeing’s decision to go ahead with the 717 paid off. Early operators were pleased with its reliability and decided to order more. Boeing marketed it to a number of large airlines, including Northwest Airlines, which operated a large fleet of DC-9 aircraft, and Lufthansa.

Boeing also studied a higher-capacity version of the 717, which would have been called 717-300, but decided against it, fearing that it would encroach on the company’s 737-700 model.

Production of the original 717 continued, as Boeing continued to believe that the 100-passenger market would be lucrative enough to support both the 717 and the 737-600.