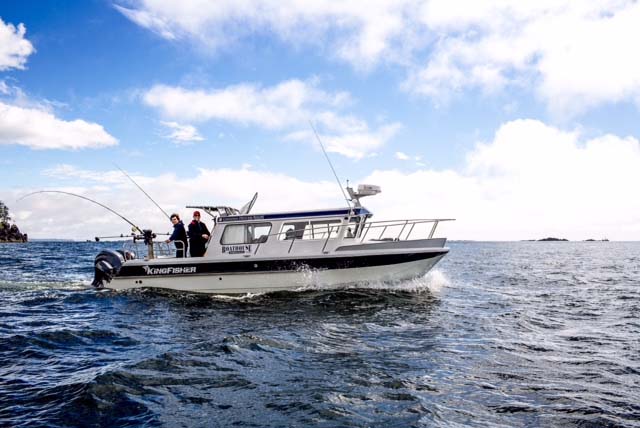 Ideal for up to four, the Kingfishers are specifically designed to operate in the offshore marine waters of B.C.’s remote, rugged West Coast and are outfitted with all the best technology to outwit fish.

At recent visit to the Canadian Princess Resort included a fishing trip on one of the Kingfishers. Our agent limited out his salmon catch (two) and also landed the catch of the day, a halibut of almost 15 kilograms and worth, if you’re counting, $490 at a fish shop.

The other fishers also caught more salmon, as well as a 12-kilogram halibut—all on barbless hooks. All of which made the morning’s fishing a good investment.

Rates start at $159 for a ride on Canadian Princess’ two deep-sea Delta Cruisers, which can hold about a dozen anglers.

A step up from the Delta Cruisers is the resort’s Boston Whaler Outrages, superb boats for two rods and a guide.

In addition to salmon and halibut, eagles and whales are also common on this rugged coast.

Earlier in the morning, we were taken on a spin on one of the Delta Cruisers, lingering off Effingham Island and spotting an eagle’s nest high in a tree.

Was this the same nest seen by Captain Cook and recorded in his log more than 200 years ago? Quite possibly, for eagle nests are used generation after generation.

Since the eagles could be heard, a deckhand flourished a rock-cod landed during a spell of bottom fishing. As the eagle closed in, he threw the rock-cod into the sea.

Eagles are not just deadly, they are smart. This one made several circuits to make sure the coast was clear before dropping his talons and making a fast approach to scoop up the fish just a few metres from out boat. Wow!

Back in Ucluelet’s well-protected harbour, the Canadian Princess vessel has a cozy pub and restaurant, the latter serving excellent calamari.

Only crew stay on the vessel these days, the clients enjoying luxurious accommodation at a handsome lodge shoreside.