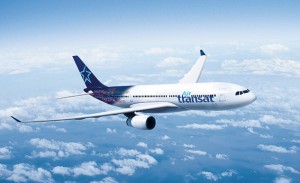 For the fourth consecutive year Air Transat has been voted the Best North American Leisure Airline by the Skytrax World Airline Awards. Travellers from across the globe take part in the world’s largest airline passenger satisfaction survey every year to pick the winners.

“We are extremely honoured to receive this international award for the fourth year in a row,” said Jean-François Lemay, general manager, Air Transat. “Thanks to the exceptional work of its employees that are constantly evolving in an industry fraught with challenges, Air Transat has shown itself to be a leader in the global airline industry. The fact that passengers themselves recognize that fact is very gratifying for us.”

The World Airline Awards began in 1999 when Skytrax launched its first global, airline passenger satisfaction survey. The 2015 survey covered 245 airlines and attracted nearly 19-million airline passengers worldwide who voted on everything from check-in and boarding to seat comfort and staff service.

In addition to its international win, Air Transat was recently voted the best Charter Airline by the 16th annual Agents’ Choice Awards, conducted by Canadian Travel Press, Travel Courier, and TravelPress.com, for the eight consecutive year.