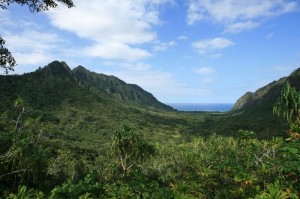 Kualoa Ranch on the Hawaiian island of Oahu was the location for many of the scenes in the movie “Jurassic World”. Photo: courtesy of Kualoa Ranch (PRNewsFoto/The Island of Oahu)

Isla Nublar, the dinosaur-teeming land from the Jurassic Park series of films, may only exist on the silver screen, but its exotic charm and wonder are a reality in the Hawaiian Islands.

Since the series first movie debuted in 1993, the islands of Oahu and Kauai have served as the key locations to bring the prehistoric creatures to life, and this summer’s box office record-setting fourth installment, Jurassic World, is no exception.

With two-thirds of the Hawaii location days for the movie spent on Oahu, visitors can now have a true Jurassic moment with a selection of experiences that bring the movie to life.

Jurassic experiences on Oahu
Known as “Hawaii’s Movie Ranch,” the landscape of Kualoa Ranch has long made it a favourite, and the area was featured extensively in Jurassic World. Visitors who really want a sense of being in the land of the Jurassic can tour Kaaawa Valley by ATV, horseback or bus via the Hollywood Movie Sites Tour. kualoa.com

Movie-goers may recall the dinosaur petting zoo in Jurassic World, which was shot at the Honolulu Zoo. Centrally and conveniently located in Waikiki, the Honolulu Zoo is the home to 905 different animals from the tropics including komodo dragons, primates, birds, reptiles, amphibians and a variety of African animals. honoluluzoo.org

Some of the main hotel interiors from Jurassic World are the state’s premier meeting venue, the Hawaii Convention Center. Featuring the latest technology combined with an authentic Hawaiian ambience, visitors can check out the various festivals and events that occur there, or simply stop by to admire its shimmering glass architecture. meethawaii.com/hawaii-convention-center.aspx

The Makai Research Pier starred as the gateway receiving visitors to the massive park in Jurassic World. In reality, the pier is home to the Hawaii Undersea Research Laboratory, but also serves as a nice stopping point on a scenic drive through the southeast corner of Oahu. While in the area, visitors should be sure to take in the views Makapuu beach and explore the Makapuu Lighthouse hike.

Some of Windward Oahu’s jungle-like scenery were immortalized in the movie, and fans can take in a similar landscape at Hoomaluhia Botanical Garden. Rightfully named “a peaceful refuge,” Hoomaluhia is blanketed in exotic flora from the Philippines, Malaysia, Tropical America, Melanesia, Hawaii, Polynesia, Africa, India and Sri Lanka. Spend a day there hiking, try your hand at catch and release fishing in the pond, or apply for a campsite to spend the evening. honolulu.gov/parks/hbg.html

Step back in time to a place steeped in 700 years of Native Hawaiian history at Waimea Valley. Visitors can stroll through a world-class botanical garden, tour ancient Hawaiian archaeological sites, participate in cultural activities and stand in awe of the Waihi Waterfall. waimeavalley.net

Slotted between the lush mountain ridges of Manoa Valley stands the 30-metre plus Manoa Falls. Visitors can hike along the well-marked Manoa Falls Trail weaving through a grove of eucalyptus trees, bamboo canopies and a rainforest of native flora, eventually ending at this tranquil waterfall.

Visit yvr.ca for airlines that fly to Hawaii and start planning your vacation.