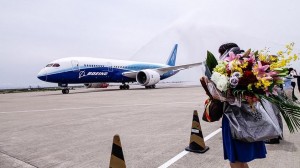 Boeing ZA001 Dreamliner, one of three original flight-test 787s, lands in Nagoya, Japan, where it will be placed on static display.

Earlier this month, more than 100 Japanese government officials and leaders from Boeing and its supplier partners joined in celebrating Boeing’s donation of its 787 Dreamliner ZA001 to Central Japan International Airport (Centrair) in Nagoya, Japan, where it will be placed on static display.

“Centrair has been a wonderful partner from the start of the 787 journey,” said George Maffeo, president Boeing Japan. “Without the vision, flexibility and teamwork of former CEO Kawakami and now CEO Tomozoe, we could not have built our Dreamlifter-based production system to achieve our production goals for the 787. Centrair literally gave flight to the Dreamliner’s wings. What more fitting place could ZA001 come to rest.”

ZA001 touched down on its last flight on Monday, June 22, 2015 at Chubu Centrair International Airport in Nagoya, Japan.

ZA001 is the third of three original flight-test 787s that Boeing is sharing with museums around the world to inspire future generations, communities and airplane enthusiasts. ZA002 and ZA003 already are on display at the Pima Air and Space Museum in Tucson, Arizona (pimaair.org), and the Museum of Flight in Seattle (museumofflight.org), respectively.