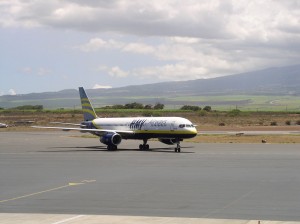 According to a report by the Conference Board of Canada, Western Canada’s strong economic growth and the growing demand for air travel could provide the right conditions for the entry of new ultra-low cost airlines.

While ultra-low cost carriers are virtually unknown in Canada, other markets such as Europe and Asia are no strangers to the concept.

According to the report, two new airlines—Jetlines and Jet Naked—might fill this space within the next couple of years, providing they raise enough capital.

Both of these airlines have former aviation industry leaders at the helm and both plan to fly to sun destinations and underserved western Canadian markets at a fraction of the cost of Air Canada and WestJet.

The Conference Board report says the number of air travellers is growing at a much greater rate in the provinces of British Columbia, Alberta, Saskatchewan and Manitoba than in Central or Atlantic Canada.

While the report noted that ultra-cheap fares would attract a new segment of travellers—those don’t normally fly—a cautionary note on the riskiness of launching a discount carrier was also sounded.

Over the past 20 years, discount Canadian airlines Jetsgo, Harmony Awards, Zoom Airlines and Canada 3000 have all failed.