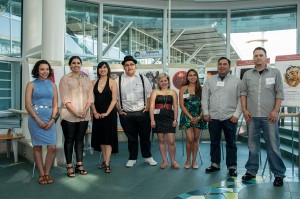 Eight BC First Nations artists have been selected as recipients of the 2014 YVR Art Foundation Scholarship Awards.

The winners were recognized at the annual YVRAF Awards Reception that also includes the unveiling of the 2013 scholarship recipients’ art projects at YVR on May 30, 2014.

“The YVR Art Foundation would like to congratulate this group of young talented First Nations artists who were selected as our 2014 scholarship winners,” said Stuart Rush, president YVR Art Foundation. “These awards are testaments to their strong desire and determination to excel in their artistic field. We are pleased to help them realize their vision and provide the opportunity to pursue their art education.”

The winners of the 2014 YVR Art Foundation Youth Artist scholarships are:

This year, the Foundation added a new scholarship award for mid-career artists of BC First Nations ancestry (age 27 and up) who wish to further their careers or extend their work into a new scale or area.

The 2014 Mid-Career Artist Scholarship recipients are:

Landon Gunn, Kwakwaka’wakw and Metis, residing in Marysville, BC

YVRAF Youth Art Scholarships are awarded annually to emerging artists of BC First Nations ancestry (under age 27) who wish to develop their artistic potential. Selected by a jury of three senior First Nations artists, the recipients receive a $5,000 scholarship to attend a formal art institution or study with a mentor over the course of one year.

At the end of the year, their art projects are unveiled at the annual YVRAF Scholarship Awards Reception and then are exhibited at YVR.

The YVR Art Foundation receives funding from Vancouver Airport Authority and from individual, foundation and corporate donors. It has awarded more than $250,000 in scholarships and awards to more than 50 artists.

For more information about the YVR Art Foundation, visit yvraf.com.

Her Own Way: Canadian Government’s guide for women travellers
Open skies between YVR, Iceland and beyond