Open skies between YVR, Iceland and beyond 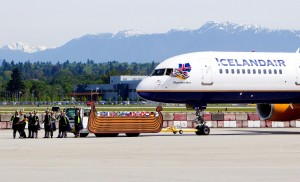 YVR ambassadors-turned-Vikings tug an Icelandair Boeing 757 aircraft to a gate at YVR, marking the airline’s inaugural flight between Vancouver, Reykjavik and more than 20 European destinations.

The skies have opened between Vancouver, Reykjavik and more than 20 European destinations with the inauguration of Icelandair new twice-weekly, seasonal service from YVR.

Last month, Vancouver Airport Authority, in partnership with ground-handler Swissport International Ltd., staged a unique welcome for its newest airline partner with a group of YVR ambassadors-turned-Vikings, who pulled Icelandair’s Boeing 757 aircraft to its inaugural gate.

Icelandair’s new service will generate approximately $2-million in wages, $1.1-million in taxes and $3.1-million in GDP through employment at YVR and in B.C.’s hotels, restaurants and tourist attractions.

Icelandair flights, which arrive in Vancouver at 5:50pm on Sundays and Tuesdays and depart at 3:55pm on Mondays and Wednesdays, will also give businesses more options to reach customers, suppliers and investors in Europe.

The Icelandair schedule for 2014 is the largest in the company‘s history and will increase by 18 per cent from 2013 with new gateways, new destinations and added frequency from several cities in North America and Europe.

Connections through Icelandair’s hub at Keflavik International Airport are available to more than 20 destinations in Europe. Only Icelandair allows passengers to stopover in Iceland at no additional airfare.

Additional information about Icelandair’s schedules, fares and packages to Iceland and beyond is available at icelandair.com or by calling (877) I-FLY-ICE.