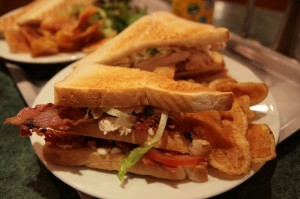 One popular theory is that the club sandwich was invented in an exclusive Santiago Springs, NY, gambling club in the late 19th century.

Geneva, Switzerland has retained the top spot as the most expensive city in the world to order a club sandwich, at an average of US$32.60, according to research released by Hotels.com.

A club sandwich, also called a clubhouse sandwich, is a sandwich with toasted bread that is filled with chicken or turkey, bacon, egg, lettuce and mayonnaise. It is often cut into quarters and held together by hors d’oeuvre sticks. It frequently has two layers which are separated by an additional slice of bread.

Now in its third year, the Hotels.com Club Sandwich Index (CSI) reflects not only changes in the actual price of a club sandwich across the globe, but also the effect of currency fluctuations between cities.

The CSI average price is calculated from the real prices paid by guests for a club sandwich in 30 hotels in either the capital or an important tourist city in 28 countries surveyed, across five-, four- and three-star categories.

Gastronomic hub, Paris, France, held on to the number two spot globally with a new average of $29.36, followed by Helsinki, Finland  (previously number 11), which knocked Oslo, Sweden out of the top three with a price of $24.35.

For the second year in a row New York came in at number 13, however, the city was the most expensive amongst other U.S. cities surveyed, with an average of $17.99 for a club sandwich.

The least expensive U.S. city to order a club sandwich was Orlando, Florida at $10.68.

India’s capital city New Delhi remained the cheapest destination for a club sandwich, with an average of just $8.78, just below Mexico City pegged at an average price of $9.78.