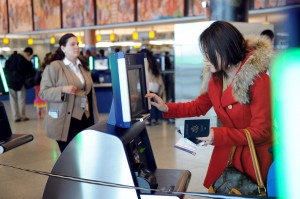 YVR’s home-grown, industry-leading border solution is now equipped with the latest biometric technology, which allows eligible international travellers from 38 countries that do not require U.S. entry visas to use BorderXpress.

Passengers from these countries, including Australia, Japan, Germany and the United Kingdom, can now enjoy a streamlined border entry process, previously only available to Canadian and U.S. passport holders.

Features of YVR’s next-generation kiosks include user-friendly fingerprinting technology and the ability to configure the kiosks in up to 26 different languages.

With international travel on the rise, airports across the continent and around the world are looking for new ways to stay competitive, by improving the passenger experience and reducing costs.

Now available at 10 airports, YVR’s BorderXpress is the leading provider of APC kiosks in North America.

In its first year alone, BorderXpress has sped up the border process for 4.5-million passengers and counting.

In a report issued on May 22, 2014, by the Executive Office of the President, U.S. President Obama endorsed the use of expedited arrivals programs such as Automated Passport Control for improving the customer experience for travellers through American airports. The report highlighted the dramatic drop in wait times experienced at O’Hare following the installation of YVR’s BorderXpress APC kiosks.