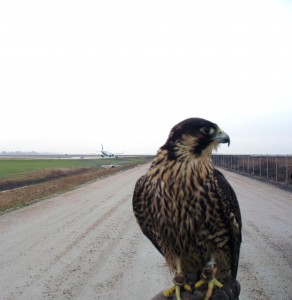 Dash is one of three new raptors that will be used to deter wild and flocking birds from gathering on or near YVR’s airfield.

Thanks to its coastal location and flat terrain, Sea Island is an ideal spot for an airport.

It is also an ideal spot for bird species, including flocks of migratory birds that regularly stop over.

Three new feathered friends recently joined the wildlife management team at YVR. Hercules, Goliath and Dash, three trained raptors, will play a very important part in ensuring the safe and efficient movement of aircraft and passengers to and from the airport.

Bird species that pose a significant risk to aviation safety include flocking shorebirds like dunlin, as well as geese. A bird strike involving a flock of geese led to the emergency landing of US Airways 1549 on the Hudson River five years ago.

Since 2012, YVR’s wildlife management team has been employing trained falcons, hawks and, most recently, Hercules, a juvenile bald eagle, to deter wild and flocking birds from gathering on or near YVR’s airfield.

To ensure that trained raptors are used as effectively as possible, YVR has teamed up with Pacific Northwest Raptors, whose professional falconers “fly” the trained raptors. Teams patrol the airfield, and release the raptors, which effectively scare away ducks, pigeons and other unwelcome fowl.

When not being flown on the airfield, Hercules and his associates make their home in a specially designed mews, or cage. These carniovorous birds form attachments with their handlers and can be quite vocal especially during a well-deserved meal of raw quail or pheasant.

Record year at YVR, with another en route
Production of Bombardier Q400 aircraft to launch in Russia in 2015