Production of Bombardier Q400 aircraft to launch in Russia in 2015 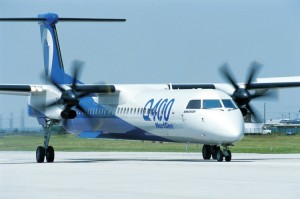 Designed for short-haul rotes, the Bombardier Q400 NextGen aircraft is a fuel-efficient turboprop.

The serial production of Canadian manufacturer Bombardier’s Q400 aircraft will be launched in Russia in 2015.

The decision by Bombardier and Russian purchaser, Russian Technologies State Corporation (Rostec) to launch the production in Russia was made as a result of the increased cost—30 per cent—the aircraft would assume as a result of import taxes.

According to Alexei Fedorov, managing director of Rostec, representatives of Bombardier will be responsible for quality control and certification of the aircraft in accordance with Canadian specifications.

The planned output of Bombardier’s Russian plant is 24 aircraft per year.

It is estimated that the number of Bombardier aircraft operated in Russia will reach 250-270 by 2030.

Yakutia, in northern Russia, will be the first region of Russia to operate Bombardier Q400, with seven of the aircraft planned for Yakut carriers.