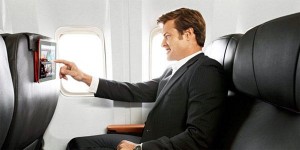 The increasing number of passengers who use iPads and other tablets onboard the aircraft has led to some innovative design solutions. Qantas, for instance, has had special iPad holders built into the seatback of its refurbished 767s, meaning passengers can watch their device hands-free. Photo: courtesy Future Travel Experience.

Rarely is the topic of portable devices on planes the focus of as much public attention as right now—making front-page national news and changing the way we look at our portable electronic and smartphone capabilities and the passenger experience overall.

Last month, air travel enthusiasts, eager for more information on how new regulations are shaping the industry, participated in a joint APEX/CEA session at the International CES January 2014 in Las Vegas.

The joint session follows a collaborative effort between APEX and CEA to gauge public sentiment on portable electronic devices (PEDs) in-flight. The joint survey was presented to a Federal Aviation Administration (FAA) PED Aviation Rulemaking Committee (ARC) leading up to the FAA’s announcement that properly tested aircraft may allow PED use below the previous 3,000-metre threshold and during all phases of flight.

“Once the FAA made its determination, airlines moved quickly,” said Michael Childers, APEX board member and a representative on the FAA ARC. “Within six weeks of the FAA announcement [on October 31, 2013] of new guidance, more than 60 per cent of U.S. airlines, representing 86 per cent of the U.S. large carrier fleet, and carrying 95 percent of U.S. passengers, had determined that their aircraft are PED tolerant through testing approved by the FAA. International airlines like British Airways and Lufthansa are following suit. Now that a solid majority of U.S. airlines have implemented PED-friendly policies, we’re really able to explore what this means for the passenger experience.”

The panel discussed ongoing issues that have resulted from the FAA decision. For example, the expanded use of PEDs has raised concerns about how they are secured during takeoff and landing, even if they do not have to be turned off. APEX representatives were among the PED ARC members who expressed concerns on this issue.

During the panel discussion, the FAA acknowledged that it is still monitoring PED stowage policy, and airlines on the panel said that stowage policies are still being discussed in an effort to harmonize them.

In addition to looking at new regulations, the panel delved into the subject of potential policy changes related to in-flight phone calls, a topic that has the close attention of the travelling public and airlines alike.

For example, the panel revealed that in-flight device usage is broken down to 60 per cent email use, 30 per cent texting and 10 per cent voice calls.

Panelists also covered ways in which airlines have responded to the changing regulations and trends in securing WiFi on U.S. aircraft.

In Canada, passengers are only allowed to use portable electronic devices during what is called non-critical phases of flight—such as the cruising portion of a flight—and only during the taxi-in phase toward the airport gate.

Transport Canada has said it is carefully reviewing and assessing the results of the FAA’s study to determine “an appropriate way forward for Canada.”