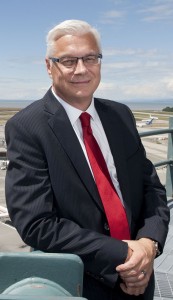 “YVR’s, the Lower Mainland’s and British Columbia’s best years are ahead of us,” said Richmond said during an October 23 Vancouver Board of Trade event. “We’re on the cusp of global greatness, connecting B.C. to the world, adding millions more passengers and thousands of jobs. We just need the government to remove these impediments to trade.”

In order to deliver on the “great promise” of the National Airports Policy, under which independent airport authorities were created as self-funding entities in the early 1990s, Richmond is asking that the federal government open up air-service bi-lateral agreements with other countries; properly fund the Canadian Air Transport Security Authority (CATSA), which oversees the screening of passengers; and remove barriers to trade by simplifying the visa process.

“Do these three things and YVR will deliver on its mandate, bringing most passenger choice, more growth and more jobs to B.C.,” said Richmond.

Using various stories—the export of B.C. cherries to China, a visit from tourists arriving on a China Southern flight, the arrival of an international student studying at Thompson River University in Kamloops, and a Vancouver consultant who commutes to Yukon mining sites by air –Richmond demonstrated the current economic importance of YVR as well as its future potential.

Tourism would also benefit with open skies and a simplified visa process that would make travel to Canada less onerous.  So, too, would international student’s access to Canada’s universities. And efficient airport security screening means everyone—from tourists to local commuters—won’t get stuck in line-ups.

“The changes we seek today don’t cost any money,” said Richmond. “And these changes will build global connections, create jobs and invest in our communities.”