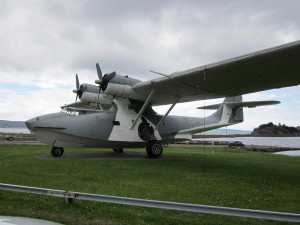 Newfoundland was a natural stepping stone when Europeans visited the Americas. A Norse explorer, Leif Erikson, established a settlement on the northern tip in 1000, and St. John’s harbour was visited by John Cabot for Henry VII in 1497.

We rented a car—pre-arranged well in advance to depart from St John’s airport (YYT)—and drove up the spectacular Great Northern Peninsula of Newfoundland, reaching the town of St Anthony on our fourth evening.

In Port au Choix (pop. 839), we enjoyed a meal at the Anchor Café listed in a guide book as one of the best places to eat in the province.

St. Anthony was our base to see Erikson’s settlement at L’Anse aux Meadows. This is a UNESCO World Heritage Site operated by Parks Canada, which is visited by 30,000 people annually. Nearby, we found a new statue of Erikson near the excellent Norseman Restaurant, and visited Norstead—a reconstruction of a Viking Age settlement.

Our next destination was a 306-kilometre drive to Gander. On the way there, we made a detour to visit the town of Botwood.

From 1937 to 1945, BOAC (British Overseas Airways Corporation) and Pan American used Botwood as a terminal for their commercial flights to Europe. The first commercial flight from here being a Boeing 314 flying boat, made legendary by author Ken Follett in his novel Night over Water. A Pan Am building described in the novel is now part of The Botwood Heritage Centre.

Some of the famous individuals to have overnighted at Botwood were Franklin Delano Roosevelt, Winston Churchill and Charles Lindbergh and his wife Anne Morrow Lindbergh.

We lunched at the waterfront near one of the most-widely used seaplanes of WWII, a preserved PBY Catalina Canso.

From Botwood, we continued to Gander, where we visited the North Atlantic Aviation Museum, which details the affection that developed between the people of the town and the thousands stranded when 39 heavy aircraft suddenly arrived on 9/11.

While there, we also visited the Gander airport terminal (YQX), opened by the Queen in 1959. There are excellent displays and a splendid mural can be seen from the Public Observation Area.

Accommodation was in short supply in Gander as a plane load of U.S.-military personnel added to the tourists. Indeed, loading our car to leave, we spotted a USAF C-17 Globemaster military transport aircraft climbing eastward.

From Gander, our eastern adventure included Gambo, visiting the Smallwood Interpretation Centre and learning about the achievements of the “last father of Confederation.”

We hiked in Terra Nova National Park, enjoying the Coastal Trail as much as we had enjoyed the Tasman trail in New Zealand.

Clarenville was our base for visiting historic Trinity, named in 1501, and we went on the splendid Skerwink cliff trail at Port Rexton.

Before concluding with three nights in St. John’s we went across country to Ferryland. There, archaeology is uncovering the 1621 Colony of Avalon. We hiked to the splendid lighthouse through fog for refreshments. 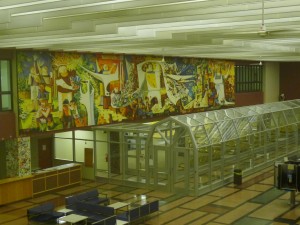 We woke to fog on our final day and our flight was slightly delayed because of a power outage at the St John’s terminal.

We applaud Newfoundland as a destination, there is much to do and see and people are courteous and friendly. Do make your bookings well ahead, though, rental cars and accommodation can be scarce at times.

Nigel Fitzpatrick is an avid traveller and one of YVR’s many Green Coat volunteers.