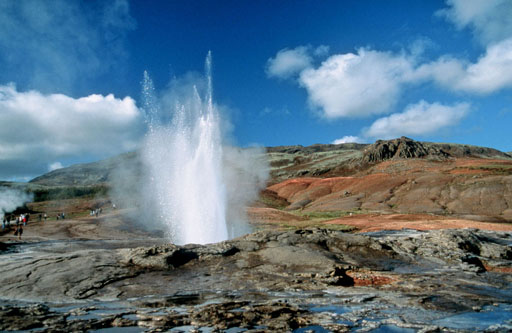 This erupting geyser in Iceland’s Haukadalur Valley is the oldest known geyser in the world.

Country: Iceland is an island of 103,000 square kilometres, about one-third larger than Scotland or Ireland. More than 11 per cent of the country is covered by glaciers, including Vatnajökull, the largest in Europe.

Capital city: Reykjavík. Keflavík International Airport is located about 50 kilometres from the capital.

Language: The official language is Icelandic, a North Germanic language derived from Old Norse. English is widely spoken and understood.

Government: Iceland is a parliamentary constitutional republic. The president is elected by direct popular vote for a term of four years, with no term limit.

Time: Iceland is on Greenwich Mean Time (GMT) throughout the year, and does not go on daylight saving time.

Energy: A hot spot of volcanic and geothermal activity, 30 post-glacial volcanoes have erupted in the past two centuries and natural hot water supplies much of the population with cheap, pollution-free heating.

Spa culture: One of the nation’s favourite pastimes is chilling out in the more than 170 geothermal pools dotted across the island’s townships.