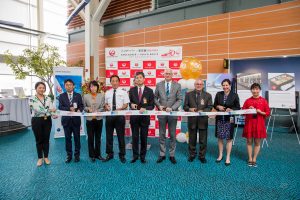 Vancouver International Airport (YVR) and Japan Airlines (JAL) celebrated 50 years of service between Vancouver and Tokyo in September 2018. The occasion was commemorated with a special ceremony to mark this unique and important connection between Canada and Japan.

With YVR’s president and CEO Craig Richmond and JAL senior vice president of the Americas Kiyoto Morioka on hand, a special gate event was held on September 10, which featured a ceremonial ribbon cutting, a showcase of historic JAL artifacts and, of course, lots of cake.

Additionally, YVR also gave away a pair of tickets from Vancouver to anywhere JAL flies in Japan.

At the end of the ceremony, JAL Flight 18 was sent off in style with lots of waves and smiles to go around.

Japan Airlines began flying its Vancouver-Tokyo route in September 1968. As the first Asian carrier to serve Vancouver, YVR was pleased to partner with an incredible airline that is renowned around the world. This connection goes far beyond just a flight, it is a symbol of many years of friendship and a signifier of the important social, cultural and economic ties between Canada and Japan.

Consistently providing top notch service to its passengers, not only at YVR but all around the world, JAL recently achieved a 5-star rating from Skytrax, the global benchmark of airline excellence.