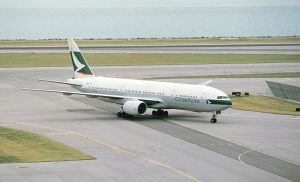 Retired by Cathay Pacific after 18 years of operation, the first-ever Boeing 777-200 can be seen at its new permanent home in Arizona’s Pima Air & Space Museum. Photo: courtesy Cathay Pacific.

Cathay Pacific and Boeing have donated the first-ever Boeing 777 airplane to the Pima Air & Space Museum in Arizona, one of the world’s largest facilities devoted to celebrating aerospace.

The jet will be displayed permanently at the museum alongside more than 350 other historic aircraft.

The aircraft joined the Cathay Pacific fleet in 2000 and was retired in May after 18 years of service. During its time with Cathay Pacific, B-HNL operated 20,519 flights, recording 49,687 hours of flying time.

In the 1990s, Cathay Pacific was one of a handful of airlines to provide input for the 777 at the design stage, which gave Hong Kong’s home airline a unique opportunity to refine the aircraft’s features to suit its needs.

Among the requests were a cabin cross-section like the 747 Jumbo Jet, a modern ‘glass’ cockpit, fly-by-wire system and, crucially, lower operating costs.

Cathay Pacific operates one of the largest 777 fleets in the world and is a launch customer for Boeing’s new 777X aircraft.