By Editor on October 17, 2016 in Aviation Shows/Events 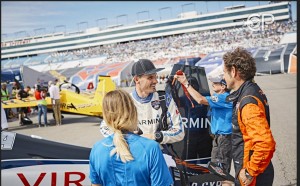 At the conclusion of the 2016 Red Bull Air Race season in Las Vegas, on Sunday October 16, Canada’s Pete McLeod of Team Garmin was awarded seventh place in the final standings, an improvement over his eighth-place result the previous year.

McLeod earned two confident podiums in the second half of this season, momentum he hopes to continue when the racing resumes in 2017.

Australia’s Matt Hall, the only pilot able to challenge Dolderer’s dominance in the final stages of the season, shared the champagne from the second step of the podium.

Third place was confirmed for McLeod’s friend Hannes Arch of Austria, the former championship winner whose dynamic season was cut short when he perished in a helicopter accident in early September.

High winds and gusts above 30 knots (34 mph) had forced the Race Committee to delay all Race Day flying sessions. When a break in the conditions arose, the Air Gates went up and the pilots took off for the Round of 14, but the weather window closed before the final two pilots could fly through the racetrack. With the Round of 14 incomplete, the day’s results were invalid. Dolderer and Hall, however, had both clinched their season-leading positions before the finale, with the points they earned at the seventh stop of 2016 in Indianapolis, USA.

Among many special moments on the unusual Race Day was warm recognition from the entire field of Master Class pilots for the close of Nigel Lamb’s racing career. The 2014 World Champion from Great Britain is hanging up his racing gloves and had delivered a fiercely competitive final season.