Win an Instant Take-Off to Paris via Air France 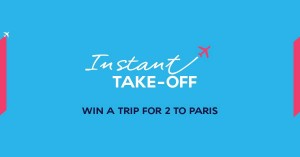 Air France has launched a contest that will allow two people to fly to Paris from Vancouver for a 4-day getaway September 9 to 14, 2016.

British Columbians have until August 31st to enter online on instanttakeoff.ca and obtain a boarding pass.

Afterwards, they need to simply present themselves with their boarding pass, a travelling companion, valid passport and their luggage at Vancouver’s Jack Poole Plaza* on September 9th, where their boarding pass will be validated between 8:30am and 10:30am.

The winning entry will be drawn at 11am.

The winner and his/her companion will immediately be whisked away to a waiting car that will transport them to Vancouver International Airport (YVR), where they will check in for their Air France flight in Economy class and then be escorted to the Air France dedicated zone of the Premium Plaza lounge before departing.

Entrants must be British Columbia residents and be 19 years old and over to be eligible for the draw.

The travelling companion must be at least age two years old.

The airline recently ran a similar contest in Montreal last May:  youtube.com/watch?v=dVrEXooXFfw

Using #AF379, contest entrants are invited to voluntarily Tweet about what Paris means to them and their relationship with the person they’ve chosen as their travelling companion. For examples, first time in Paris, 12th time; a trip with a member of the family, boyfriend, girlfriend; celebrating an anniversary; reliving a memorable holiday; etc.

About Air France in Canada

For passengers travelling beyond Paris, all Air France tickets allow for one free stopover in Paris.