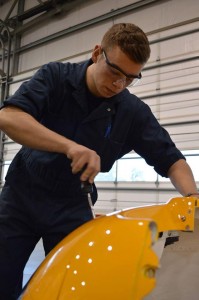 A joint venture between the British Columbia Aviation Council (BCAC) and the Air Cadet League of Canada British Columbia Provincial Committee (BCPC) has resulted in a work experience program accredited by the BC Ministry of Education.

This program will see youth completing 40 hours towards their High School Graduation Transition (HSGT) program in the aerospace and aviation industry.

The Air Cadet Work Experience Program, launched in 2011 is complementary to the Air Cadet advanced training syllabus as it provides the opportunity for Cadets to work in either an aircraft maintenance and overhaul facility or an airport operations environment.

Once an industry partner is identified, the students must apply for the work position and get it approved by their school counselor. Students are then expected to attend an orientation tour and briefing provided by the host company and will work under the direct supervision of a mentor.

The HSGT program has been well received by all stakeholders particularly, the parents and educators and is proving to be of increasing interest to our aerospace industry partners. Several of whom have hired the students after completing their work experience.

While the Work Experience Program is not an Air Cadet-run program, it is facilitated by the Air Cadet League of Canada British Columbia Provincial Committee (BCPC) and with an April 30, 2015 signing of a Letter of Affiliation between the BCAC and the BCPC, this successful program will now be expanded to open work opportunities to non-cadet students.

If your company is interested in supporting the development of skilled aviation workers please contact Mr. Norm Lovitt at the Air Cadet League of Canada British Columbia Provincial Committee (604-732-9119/ BCPC@aircadetleague.bc.ca).