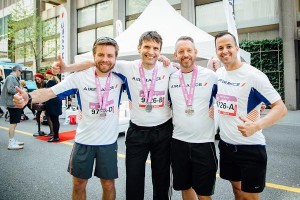 Vancouver welcomed Air France’s new seasonal service between Paris and Vancouver on March 29, 2015 and the airline has already demonstrated that it wants to be here for the long-haul by participating in this month’s 42-kilometre Vancouver Marathon.

In addition to being the official airline at the Vancouver Marathon, held on Sunday May 3, Air France also fielded a team for the relay race, a new event added for the 2015 edition.

Representatives of Air France-KLM, Delta Air Lines and the Vancouver Airport Authority formed the four-member team that ran the marathon.

“Just weeks after inaugurating our Vancouver-Paris service, we are proud to have been involved within the Vancouver community as the official airline of the 2015 Vancouver Marathon, one of the city’s biggest events,” said Jean-Noël Ault, vice-president and general manager of AIR France-KLM Canada. “We are also proud to have literally teamed up with our partners to run this spectacular race course.”

The airline further contributed to the event by setting up an Air France Waterfront Lounge for visitors on the Vancouver Convention Centre terrace, taking part in the Street Festival, where runners or passersby were able to stop in for a massage at the airline’s booth, and running a contest titled Bon Voyage, with a pair of tickets to Europe as the grand prize.