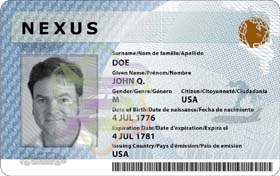 Travellers enrolled in the NEXUS screening program and other low-risk travellers will now process through airport security lines in an speedier fashion.

Low-risk or Trusted Travellers are those who have undergone extensive background checks, such as members of the Canadian and American armed forces, uniformed airline crews and members of the U.S. Global Entry travel program.

In addition, to facilitate clearing customs, upgraded Trusted Traveller kiosks are now installed in all airports in Canada where NEXUS is available. At Canada’s busiest airports, the CBSA has also installed more kiosks to accommodate the growing popularity of the program. These upgraded kiosks will provide faster, more reliable and efficient service and make air travel more convenient for all air passengers, while still maintaining a high level of security.

All travellers can access a new portal on Canada.ca/HolidayTravel to enable faster and more convenient holiday travel. Drawing important information from across government, it provides links to user-friendly tools like the Current Border Wait Times table and the Travel Smart app for consular information and assistance abroad.

As of December 2014, more than 1.1-million travellers had enrolled in the the NEXUS program, which allows speedy crossing of the Canada/U.S. border.

Did You Know—how many landings before an aircraft’s tires are replaced?
Help design a special bank note for Canada’s 150th anniversary