By Editor on September 11, 2014 in Southwest Airlines 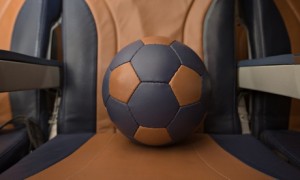 After a recent large-scale redesign of many of its 737 aircraft, U.S.-based Southwest Airlines found itself with an excess of 80,000 leather seat covers—enough to fill the Empire State Building.

The replacement of leather seat coverings with a durable lightweight material was done in order to reduce aircraft weight—272 kilograms per plane—and thus fuel consumption.

Southwest reached out to potential partners to take the used leather, but found that there were few takers.

Following the advice of Bill Tiffany, a Southwest vice president who grew up in Kenya, the airline turned towards Africa for recipients of the used leather.

Instead of just donating the goods as-is, the airline decided to give the materials to NGOs that will use them to provide job training and health education.

The main partner is SOS Children’s Village Kenya, which is providing paid apprenticeships and training to orphaned youth, who in turn make shoes and soccer balls from the leather.

The shoes will be given to Maasai Treads, which distributes them as part of a campaign to fight debilitating foot parasites.

The soccer balls will be donated to Alive & Kicking, a charity that uses sport to educate young people on HIV/AIDS and malaria prevention.