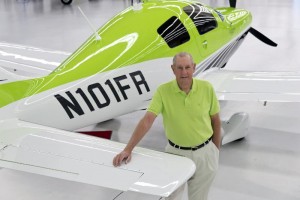 The challenge of flying a private, general aviation airplane to all 49 state capitals in the Lower 48 plus Alaska in just two weeks is one that most private pilots would never accept.

It is, however, the flight plan for a journey being attempted by two veteran pilots to raise public awareness about smaller, municipal airports that can be a gateway for bringing new tourism traffic into an area.

Called the Capital Air Tour, the flight will be flown by Field Morey, an FAA-Certified Flight Instructor from Medford, Oregon, and Conrad Teitell of Greenwich, Connecticut, and an attorney.

The pilots will use Morey’s 2013 Cessna Corvalis TTx four passenger airplane for the flight, departing Tuesday, September 16, 2014 and landing in several states each day.

Morey is an expert in adventure flights, as he has instructed hundreds of instrument flight students on exciting real world weather flights to Alaska, the Rocky Mountains and the Idaho backcountry through his company, Morey’s West Coast Adventures (http://www.ifrwest.com).

The entire flight will be tracked using an on-board Spot Generation 3 GPS tracking device showing the real-time location of the Corvalis TTx and will offer school teachers a chance to give lessons in time, distance and U.S. state capitals. A complete itinerary with tentative schedule, along with the tracking map, is available for the public to follow at www.ifrwest.com/cat.

“The Cessna Corvalis TTx is the fastest single-engine, fixed gear production aircraft on the market and has a maximum cruising speed of 235 knots,” said Morey. “With that level of performance, we are able to plan a mission profile for the Capital Air Tour that involves covering over 12,000 miles with stops at 57 airports in two weeks.”

The airplane to be used on the Capital Air Tour is nicknamed The Green Hornet, and is equipped with a Garmin G2000 glass cockpit panel that includes NEXRAD radar for storm avoidance, anti-ice equipment, and terrain and traffic avoidance devices, along with the latest autopilot technology essential for avoiding crew fatigue.