By Editor on September 11, 2014 in Canada Post, Sea Island Community 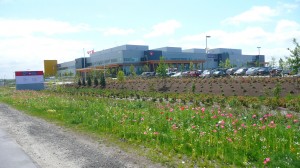 As part of a nationwide postal transformation effort, which began in 2008, Canada Post relocated its operations from both the Vancouver Mail Processing Plant at West Georgia Street and the Vancouver Parcel Distribution Centre at No. 6 Road, Richmond, into the new facility.

Building a processing facility at the YVR Sea Island location was a strategic decision that was made to improve Canada Post’s access to vital transportation links and open the way for synergies with the airlines and the cargo community already located there.

Vancouver is one of three international access points for Canada Post and plays an increasingly important role in facilitating trade with Asian countries. With its international role, the PPC facility will house a Canada Border Services Agency operation to better serve western Canadians.

The new postal facility was built to Leadership in Energy and Environmental Design (LEED) standards to take up as small an ecological footprint as possible.