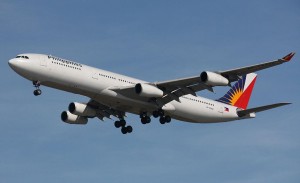 With the recent upgrading of Philippines Airlines to Category 1 rating by the U.S. Federal Aviation Administration, the airline will deploy its fleet of Boeing 777-300ER aircraft to the U.S. mainland for non-stop flights.

As such, effective September 1, 2014, Philippine Airlines existing Manila-Vancouver-Toronto route will be switched to the use of Airbus A340-300 aircraft. Currently, the airline uses Boeing 777-300 ER aircraft on the route.

Philippine Airlines is also eyeing to double its flight frequencies to Canada, following the successful conclusion of recent air talks between both countries.

With the Philippine government securing an additional seven flight frequencies per week to Canada, the airline said it will file its manifestation before the Civil Aeronautics Board (CAB) to secure the entitlements.

Once approved by CAB, the entitlements will increase Philippine Airlines total flight frequencies per week to Canada from seven to 14.

“With the successful conclusion of the government-to-government air talks, we look forward to flying twice daily to Canada and offering our passengers greater flexibility and choice,” said Ramon Ang, Philippine Airlines president and chief operating officer.