Nanguz (pronounced Nan-guzz) the fox has been selected as the official 2015 Canada Winter Games’ mascot. 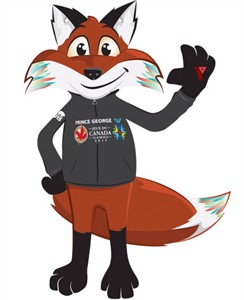 Nanguz the fox named the official mascot of the 2015 Winter Games.mascot, following two weeks of public voting for the 2015 Mascot Challenge.

Nanguz means fox in the Dakelh Carrier language and was created by elementary student Kaitlyn Muir from Prince George.

Nanguz is a multi-sport athlete who lives in a den in northern BC. He is also a red fox with a tail the colours of the Northern Lights, who loves being outside, whether playing sports or enjoying the outdoors.

“Kaitlyn’s story for Nanguz captures the essence of the 2015 Canada Winter Games, which will help us share our northern story with all Canadians,” said Stuart Ballantyne, CEO of the 2015 Canada Winter Games. “The name Nanguz is pronounced the same in both French and English, which is key for a bilingual event like the Canada Games, and also highlights the First Nations heritage of our community. Nanguz embraces living in the north by participating in a variety sports and staying active in the outdoors, something those who live here can relate to.”

Fraser the eagle, Nanguz the fox and Spruce the moose were selected from almost 400 submissions by elementary school students all across northern BC. Public voting opened online on February 15 and closed on March 1. Two thousand, nine hundred and thirty-five votes were cast by the general public in the 2015 Mascot Challenge between February 15 and March 1 from across Canada.

“The mascot challenge is a creative and clever way to come up with a uniquely homegrown mascot for the 2015 Canada Winter Games,” said Minister of Community, Sport and Cultural Development Coralee Oakes. “With hundreds of entries received from across the north and nearly 3,000 online votes for the finalists, this mascot is truly community-based. I congratulate Kaitlyn Muir for her wonderful design and look forward to seeing Nanguz the fox at the 2015 Games.”

The 2015 Games’ mascot is presented by the YMCA of Northern BC and the full mascot costume version of Nanguz will make its first public appearance on Healthy Kids Day at the Prince George YMCA Road Race on June 1, 2014.

As the winner of the 2015 Mascot Challenge, Kaitlyn Muir will be an official torchbearer in the 2015 Canada Winter Games Torch Relay, and will receive a class pizza party with the mascot in June, a three-month YMCA family membership and a 2015 Games Gear package.

The 2015 Canada Winter Games will be the largest multi-sport and cultural event to ever be held in Prince George and northern British Columbia and is forecasted to generate an economic impact of $70- to $90-million while building champions and inspiring dreams amongst Canadian youth.

Athletes from 10 provinces and three territories will compete in 19 sports with the dream of becoming Canada’s next champions.

2014: Celebrating the Year of the Horse
Win a family fun getaway and do good while on vacation in WineCoastCountry