2014: Celebrating the Year of the Horse 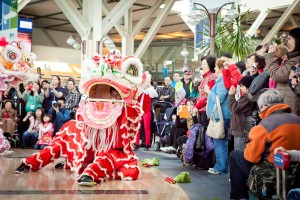 A traditional lion dance ushers in good luck to the Year of the Horse as part of Chinese New Year celebrations at YVR.

January 31, 2014 marked the start of the Lunar New Year and festivities throughout YVR welcomed the Year of the Horse.

Following a traditional welcome ceremony, YVR’s Lunar New Year celebrations kicked off with a Lion Dance in front of the Haida Gawaii, Spirit of the Jade Canoe sculpture. To the delight of spectators, the lions danced from the International to the Domestic terminals to the beat of drums, gongs and cymbals, visiting some of YVR’s shops and restaurants.

The Lion Dance is an important Chinese cultural tradition that is used to scare evil spirits and open the door for all good things—health, happiness, wealth and prosperity in the year ahead.

The Chinese lunar calendar is based on solar and lunar cycles, with each New Year falling on a different day of the Western solar calendar.

The Chinese Lunar New Year runs in cycles of 12, with each year in the cycle representing a different animal. Horse years are seventh in the rotation. In its entirety, and in order, the rotating cycle of animals are rat, ox, tiger, rabbit, dragon, snake, horse, goat, monkey, rooster, dog and pig, with each animal corresponding to a zodiac sign.