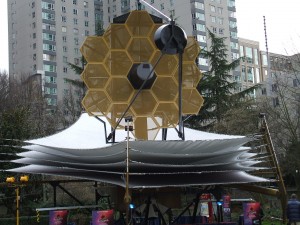 A model of the James Webb Telescope—a project of NASA, with international collaboration from the European Space Agency and the Canadian Space Agency, including contributions from 15 nations, it is estimated to be completed by 2018 at a cost of $8-billion.

Building on the success of astronaut Chris Hadfield, who became the first ever Canadian to take command of the International Space Station (ISS), the Canadian Government has unveiled a framework designed to serve as a guide for Canada’s strategic activities and future in space.

The framework, which also aims to provide inspiration for a future generation of Canadians interested in space, is based on five principles for the future:

The telescope, which will include contributions from 15 nations, will study every phase in the history of our Universe, ranging from the first luminous glows after the Big Bang, to the formation of solar systems capable of supporting life on planets like Earth, to the evolution of our own Solar System.