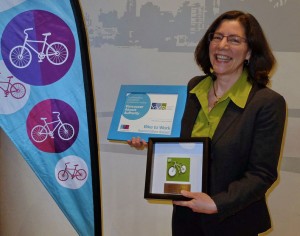 HUB (formerly the Vancouver Area Cycling Coalition) is a charitable organization, established in 1998 to address cycling issues in Metro Vancouver.

As a community-based organization, YVR has proudly supported and participated in Bike to Work week since 2009.

In 2011, Vancouver Airport Authority completed bike route enhancements along Inglis Drive and the south end of Templeton Street and added a connection from the off-road path at the Arthur Laing Bridge to the Templeton Canada Line Station.

YVR’s Green Commuter Program has provided incentives for airport employees to cycle, walk, transit, or even rideshare to work and also added seven kilometres to the cycling network on Sea Island.

These upgrades have helped make Sea Island a cycling destination for everyone.

For more information about cycling and biking around Sea Island, visit yvr.ca.