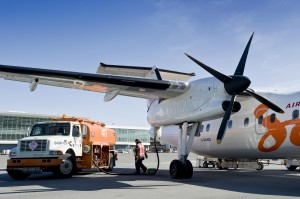 The B.C. government recently issued an Environmental Assessment Certificate for a proposed new Vancouver Airport jet fuel delivery system, taking an important next step in a project that is considered key to YVR’s continued growth as a global gateway airport and local employer.

Port Metro Vancouver has also just concluded its federal environmental assessment review of the project and determined that it is not likely to cause significant adverse environmental effects after the implementation of mitigation measures and environmental conditions.

The jet fuel delivery project is led by Vancouver Airport Fuel Facilities Corporation (VAFFC), a consortium of airlines that operate at YVR.

Vancouver Airport Authority is confident that VAFFC will continue to focus on environmental safety and supports the significant environmental sustainability and safety mitigation commitments included in the conditional approval.

The new jet fuel delivery project is needed because the existing delivery system is unsustainable. It consists of deliveries through a 43-year-old, 40-kilometre pipeline from Burnaby supplemented by about 1,000 tanker trucks a month from the U.S. Any growth in fuel demand at YVR will depend on more cross-border fuel truck shipments.

In 2001, VAFFC began studying alternate long-term fuel delivery systems to serve YVR. In all, 14 options were identified and assessed based on the potential economic, environmental, social and regulatory impacts associated with their construction and operation.

The proposed project emerged as the preferred option because it best met safety, environmental, technical and economic criteria, and offered long-term reliability of fuel supply to YVR. It would also accommodate a range of vessel sizes due to the deep water conditions at the terminal site.

The new fuel delivery project includes upgrades to an existing marine terminal and development of a fuel receiving facility on industrial zoned land on the north bank of the South Arm of the Fraser River. It will include a 15-kilometre underground pipeline to YVR. The estimated cost of the project is $70-million to $100-million.

More than 23,000 people call YVR their workplace, including almost six per cent of working Richmond residents. The shared success of the YVR community and the City of Richmond depends on a long-term, safe and secure jet fuel delivery system for YVR.

The proposed new jet fuel delivery system will allow YVR to continue to operate the airport for the community’s benefit and contribute millions to the economy, all while connecting B.C. travellers and businesses to the world.