By Editor on January 9, 2014 in Travel Features 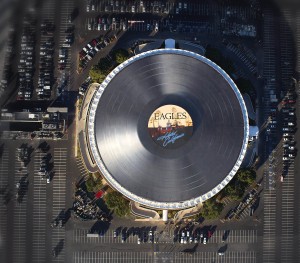 For the month of January, 2014, the world’s largest vinyl album is spinning on top the Forum in L.A. as a tribute to the Eagles upcoming concerts at the venue.

Throughout the month of January 2014, passengers arriving on flights at Los Angeles International Airport (LAX) should have their cameras ready for a record-breaking photo-op.

The roof of the iconic venue, the Forum, has been turned into the world’s largest vinyl album, an enormous tribute to the biggest band to ever come out of Southern California, the Eagles.

Since New Year’s Day, visitors on the 1,700-plus daily flights to the nation’s third busiest airport have seen the massive record, as the Forum in Inglewood is directly under the arrival flight path.

From concept to completion in just 45 days, here’s what it took to build the largest vinyl record.

The Forum venue, which is in the final stages of a $100-million renovation, will reopen on January 15 with the Eagles’ “History of the Eagles” tour performances. For more information, visit the band’s website at eaglesband.com.

For information on flights from YVR to LAX, visit yvr.ca.