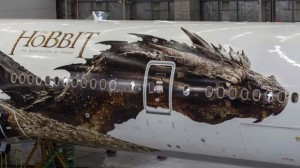 The creation of the bespoke 54-metre-long Smaug dragon on both sides of the Air New Zealand plane was done by director Peter Jackson’s visual effects company, Weta Digital.

In celebration of the second movie in the Hobbit trilogy, Air New Zealand recently unveiled a 54-metre image of the dragon Smaug on one of its Boeing 777-300 aircraft.

The unveiling was the first time fans got a chance to see director Peter Jackson’s interpretation of Smaug.

In the first Hobbit movie, the director revealed only the dragon’s eye.

The Hobbit trilogy was filmed in New Zealand and is based on the book of the same name by J.R.R. Tolkien.

New Zealand has sought to use the popularity of the Hobbit movies as a way to market itself and boost tourism.

Air New Zealand spokesman Andrew Aitken said it intends to keep the image on the plane for at least a year, until the opening of the third Hobbit movie.