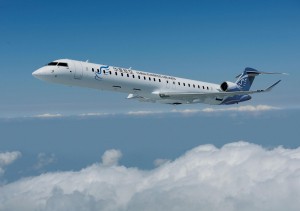 China Express Airlines was the first regional airline in China to operate Bombardier CRJ900. Additionally, the airline recently purchased an additional three CRJ900s, with options on a further eight aircraft.

The agreement is a first step toward the creation of a joint venture, which is intended to result in the construction of a maintenance facility in 2016.

Located in Tianjin, China, the facility will support the maintenance, repair, overhaul, and associated activities and services for all Bombardier business aircraft and, subject to certain conditions, on Bombardier commercial aircraft.

Under the joint venture, the facility will be operated using similar processes and procedures that govern Bombardier’s wholly owned Service Centre network worldwide.

Bombardier Aerospace and the Tianjin Airport Economic Area are working toward definitive agreements to be signed in 2014, subject to obtaining the required internal, governmental and third-party approvals.

The fast-growing Bombardier fleet of Learjet, Challenger and Global jets occupies a one-third share of the business jet market in Greater China.

Bombardier’s latest market forecast for the aviation industry predicts a total of 2,420 business jet deliveries destined for China over the next 20 years. To date, Bombardier business aircraft based in the Greater China region have reached more than 100 jets.

In the 2013-2032 market forecast for commercial aircraft, Bombardier predicts that operators in Greater China will take delivery of 2,330 aircraft in the 20- to 149-seat commercial aircraft segment, making it the second most important region, following the United States.

More than 40 of Bombardier’s commercial aircraft are currently in operation in Greater China.