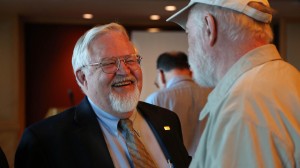 Longtime airport Chaplain Layne Daggett has retired after 30 years of service to the YVR community.

Daggett opened the Chapel in 1983 at what he affectionately called a “converted” ticket counter in what is now the Domestic Departures area. From humble beginnings, it grew to reach more than 10,000 visitors last year.

Daggett has gone to incredible lengths assisting YVR customers throughout his career. From working with new Canadian immigrants, refugee claimants, employees and local community members to conducting weddings, funerals and Fear-of-Flying workshops, Daggett has made himself and his Chaplaincy, available to provide guidance, both spiritual and practical, often returning to the airport late at night to assist where no other options are available.

He also introduced the Airport Chaplaincy Thrift Store as a way to redistribute unclaimed lost and found items and raise funds to support the work of the Chaplaincy.

Although Daggett is leaving his post as Chaplain, he isn’t leaving the YVR community altogether. He has accepted a position to serve on the Board of Vancouver Airport Chaplaincy and he will continue to conduct Fear-of-Flying workshops.