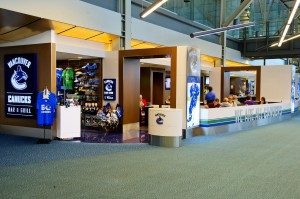 With its Canucks décor and assortment of team merchandise for sale, Vancouver Canucks Sports Bar & Grill, located in the U.S. Terminal after security, provides a true fan experience.

If you are heading to a U.S. destination be sure and plan some extra time to stop off at the new Vancouver Canucks Bar & Grill after clearing security and U.S. Customs and Border Protection.

The restaurant opened to the public in late August and held a grand opening event on September 18that was attended by representatives from Canucks Sports & Entertainment, HMSHost, Vancouver Airport Authority and special guest, Vancouver Canucks defenseman Jason Garrison.

In partnership with global restaurateur HMSHost, a world leader in airport dining, the restaurant is committed to delivering premium guest experiences and providing meaningful first and last impressions to visitors of British Columbia.

“YVR is a world-class airport, distinctly representing British Columbia,” said Michael Doyle, Canucks Sports & Entertainment executive vice president and arena general manager. “We are very happy to be a part of the YVR family and have the opportunity to showcase our passion for hockey in our community. The Vancouver Canucks Sports Bar & Grill and HMSHost are committed to providing exceptional customer service and a true fan experience with every visit.”

Designed to recreate a club level experience at Rogers Arena, the Vancouver Canucks Sports Bar & Grill connects guests to the excitement and action of a Canucks game.

“HMSHost looks forward to welcoming Vancouver travellers and fans to a unique dining experience that centres on the love of hockey,” said HMSHost vice president of business development Renee Tedesco. “Guests will feel as if they’re right in the VIP suite of a Canucks game.”

The bar and lounge area offers premium spirits, wine by the glass and beer on tap or bottled.

“We are pleased that Canucks Sports and Entertainment has partnered with HMSHost to open the new Vancouver Canucks Sports Bar & Grill here at YVR,” said Tony Gugliotta, senior vice president, marketing and business development, Vancouver Airport Authority. “The Vancouver Canucks are British Columbia’s premier sports team and we are thrilled to welcome them to YVR. We also congratulate HMSHost on continuing to provide first-class dining options to our passengers.”

Current business operating hours are 5:30am to 8pm.