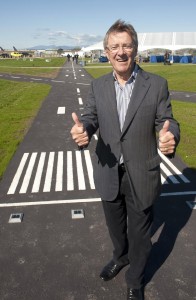 The park is located at the corner of Russ Baker Way and Airport Road and is directly in line with the end of the south runway, making it a prime location to plane spot.

During the past three months, contractors have been working hard to complete the project so that the community still has time to enjoy the park during the fall.

There have been many upgrades and interpretive elements added to this community gathering space.

A raised central plaza featuring a giant globe is the focal point of the park. The globe celebrates YVR’s role in connecting British Columbia with the entire world and can be climbed on and explored from many vantage points.

Tail wings feature historical YVR facts and educational aviation statistics that tell the story of YVR and why it is one of the best airports in the world.

Small hills and berms have been added to allow for better views and a viewing platform has been created to provide a spot to see the runway over top of the perimeter fence.

Information boards describe some of the identifying features of aircrafts so that even novice plane spotters can identify the aircraft overhead.

Walking trails have been added and the runways paths have been enhanced and stylized to reflect the markings and lights of YVR’s runways.

The existing memorial benches have been incorporated into the design of the park. These new benches are made from recycled material and can be used to sit upon, reflect and enjoy the park.

The picnic tables have also been updated and new paper airplane style benches have been added to create more seating and add to the design elements and theme of the park.

Larry Berg Flight Path Park is the perfect place for a family picnic on a sunny day, or to watch the planes soar overhead as they depart and arrive from destinations around the world.

Vancouver Airport Authority is thrilled to have revitalized this wonderful family space and to recognize and celebrate the legacy of its former president and CEO, Larry Berg.

If you have any questions or concerns, please contact Community_Relations@yvr.ca.