British Airways calculates it takes 96 people: To fly. To Serve.

By Editor on September 19, 2013 in British Airways 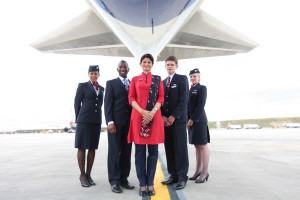 To coincide with its latest ad campaign called To Fly. To Serve, British Airways (BA) has calculated the essential people involved in processing each passenger in their travel. It includes 96 different roles, across 18 different departments, using more than 11 external suppliers in the process.

The figures rise to 107 roles for premium customers, which can include the additional benefits of fast-track boarding, lounge access and personal meet and greets.

Looking at just one strand in the chain highlights the process involved to make flying a seamless process.

For instance, the fish pie served to customers on board started out at Severn and Wye smokery in Gloucestershire, where fish is farmed. At Gate Gourmet in London, meal trays are assembled and dishes freshly prepared ahead of flying. Kuehne and Nagel deliver cutlery and tablewear for the meal trays. The menu has been considered for quality, taste and seasonality in advance by Mark Tazzioli, British Airways menu manager. On board, a member of cabin crew prepares and delivers the meal. Once enjoyed, it’s returned to the aircraft kitchens and loaded into containers. When the aircraft lands, the containers are offloaded and returned to Gate Gourmet and the process starts again.

Before flying, there are 23 crucial roles behind the scenes working to ensure everything is in place for the flight. On flight day, there are 38 people that contribute directly to getting a passenger in the air.

On board, there’s an average flight team of 16 people, including cabin crew, captains and senior first officers. Upon landing, there are 19 people to ensure a passenger’s safe arrival.

For passengers, air travel is as simple as book, pack, and fly. Behind the scenes, there’s an entire army of people who come together to get each customer in the air.