The ultimate one-way ticket to ride 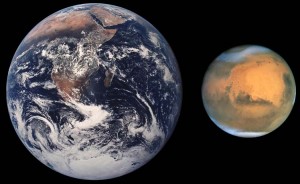 Size comparison of Earth and Mars.

There were no shortage of Canadian applicants to join Mars One—a $6-billion project that plans to establish a permanent human colony on Mars by 2023.

The deadline to apply for the first mission was August 31, 2013 and almost 7,000 Canadians applied in the hope of being selected for the one-way trip.

The thought of spending the rest of their lives more than 225-million kilometres from Earth appealed to more than 165,000 applicants from 140 countries, who paid an application fee ranging from $5 to $75 depending on the country from which they were applying. The company said it set the price based on the gross domestic product per capita of each nation.

From these applicants, a final four-member crew will be chosen through three additional selection rounds.

Mars One, the brainchild of Dutch engineer Bas Lansdorp, is backed by his not-for-profit organization of the same name co-founded with Arno Wielders of the European Space Agency. The project is endorsed by Nobel Prize-winning physicist Gerard ‘t Hooft.

The goal is to bring along a rover and a team of engineering and medical professionals to set up a permanent colony, starting with four people and expanding by four more every two years.

For the first crew, the $6-billion Mars One mission will be funded by sponsors and media that will pay for broadcasting rights of shows and movies documenting everything from the astronauts’ training on Earth to their deployment and colonization of Mars.

Paul Romer, co-creator of the Big Brother reality-TV series was made a Mars One ambassador in April 2012 and will likely be instrumental in creating a TV show to aid the funding of the mission.

Mars One isn’t the only group hoping to make history by sending people to the red planet. The non-profit Inspiration Mars Foundation in the U.S. wants to launch two people—a man and a woman—on a 501-day, round-trip journey to Mars and back in 2018 without ever touching down.

Named after the Roman god of war, Mars is the fourth planet from the Sun and the second smallest planet in the solar system. It is often described as the Red Planet because the iron oxide on its surface gives it a reddish appearance. Its surface features are reminiscent of the craters of the Moon and the volcanoes, valleys, deserts, and polar ice caps found on Earth.