British Airways has set two Guinness World Record titles including the Highest Harlem Shake and Highest Concert in the sky. 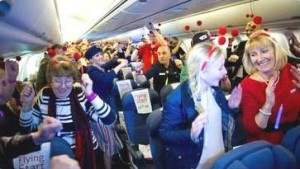 Highest concert in the sky was achieved when English pop singer Kim Wilde along with Tony Hadley from Spandau Ballet performed their hit songs on a Boeing 767 aircraft for Comic Relief’s Red Nose Day, a biennial British charity telethon.

On board the flight, Captain Mannering-Smith announced when the aircraft reached the correct altitude for the performances to begin. In order to break the previous Guinness World Record held by James Blunt 12,826 metres, the artists had to perform a 15-minute set at higher altitude, accompanied by musical instruments.

The 128 passengers aboard the flight also danced their way into the Guinness World Record books by performing the latest internet craze—the Harlem Shake dance.

British Airways has raised more than $6-million for Flying Start—the airline’s charity partnership with Comic Relief—to help transform the lives of vulnerable and disadvantaged children in the U.K. and some of the poorest countries around the world.

A video of the event is available at: http://youtu.be/KHmwdNSzQ3k