YVR to Delhi and beyond 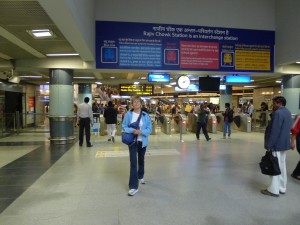 Six generations of my family lived in India, so when I married Joan, whose mother was born there, we talked of visiting.

Thirty years later, volunteering at YVR as a Green Coat, we realized it was time to see what it was about India that had so drawn our families.

On February 19, our daughter drove us to YVR to catch Air Canada 854 to London Heathrow Airport. The planned five-day break in England allowed a catch-up with cousins, one of whom was born in Delhi.

While there, we travelled via the rickety London underground system to the Criterion Theatre in Piccadilly Circus to enjoy a comedic version of The 39 Steps by the former Governor General of Canada, John Buchan.

We departed from London via Virgin Atlantic to Delhi, where we adjusted our body clocks by spending two days in this bustling city. While there, we learned how to use the modern Delhi Metro with its Singapore-like granite platforms. We zipped to Rajiv Chowk, one of the largest business centres in Delhi—formerly called Connaught Place and where my grandmother once operated a dress shop in the 1930s. We also visited the modern Akshardham temple, near to the site of the 2010 Commonwealth Games.

From Delhi, we then began our tour with five others, beginning with four hours on a morning train to Kalka station, where my grandfather had begun his career. This is the start point for the six-hour journey on narrow gauge track up to Shimla, the former summer capital of the Raj, where the partition negotiations of 1947 took place.

After two pleasant days, with views of the Himalayas in cameras and one sketch pad, we headed back to Kalka to board the train for the rest of the tour.

This time, our group tripled in size, one of the additional travellers having come from YVR through China.

Over the next few days we were whisked via air-conditioned bus to seven world heritage sites including the Taj Mahal and the enormous temporary capital of the Mughal Empire, Fatepuhr Sikri, in Uttar Pradesh. From there, we travelled to a quiet, camel-intensive village in Rajasthan before returning to Delhi.

We returned to YVR’s welcoming water feature on March 10, 2013 aboard Lufthansa flights, via Frankfurt, coded AC9353 and AC9101. The long journey home to Vancouver had been eased by use of the Priority Pass lounge in Delhi’s splendid modern airport, where our Diner’s Club cards gained us free entry.

Though tired, we delighted to be met by our Toronto-based son, who on his own recent visit to India had unsuccessfully tried to get a seat on the train up to Shimla. Our success in doing so was complimented.

England and India began their long relationship when Elizabethan adventurer Ralph Fitch arrived at the Mughal Court at Fatepuhr Sikrit near Agra in 1583. Both cities were then larger and wealthier than London. Currently, an Indian company controls production of two of England’s most iconic brands—Jaguar and Land Rover.

Though much larger than London, at present Delhi is not wealthier but it certainly has the potential.Already the quality of trains on the Delhi Metro system is impressive compared with the rattle of the London Underground.

Nigel Fitzpatrick is one of the many welcoming Green Coats to be seen at YVR.