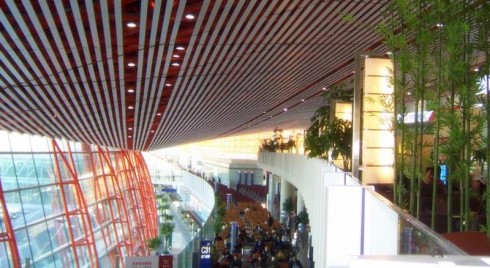 Air China lounge (next to the bamboo, top left) at Terminal 3 of Beijing Capital International Airport, the airline’s main hub.

Air China will increase the number of scheduled flights operated from Vancouver to Beijing, China from 7 to 11 flights per week.

The new flight, CA 998 will depart Vancouver on Tuesdays, Thursdays, Fridays and Sundays at 10am, arriving into Beijing Capital Airport at 12:25pm, the following day.

The returning flight, CA 997, will depart Beijing at noon, every Tuesday, Thursday, Friday and Sunday, arriving into Vancouver at 8am the same day.

“The additional nonstop morning departures are expected to be extremely popular with the travelling public,” said Xu Junhong (John), Air China’s general manager in Vancouver. “The early afternoon arrival time into our hub at Beijing’s Capital Airport allows for convenient connections to more than 90 domestic destinations in China, as well as more than 40 international destinations.”

Xu further stated that the ongoing encouragement received from B.C.’s provincial government, the Airport Authority and other tourism stakeholders across Canada helped to cement the decision to expand Air China’s Vancouver-Beijing flights.

The new flights are in addition to Air China’s daily flight, CA 992, which departs YVR at 1:50pm.

All flights to Vancouver are serviced by Airbus A330-200 aircraft.