By Editor on February 19, 2013 in Historical Features 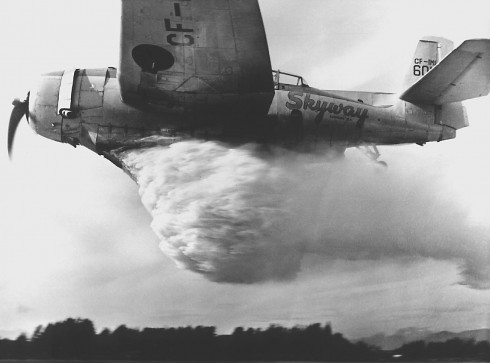 Many Grumman Avengers have survived into the 21st century working as spray-applicators and water-bombers throughout North America.

When the Second World War ended in 1945, Canada’s Prairie Provinces became the repositories of many of the country’s surplus aircraft—mainly training aircraft used by the famous Commonwealth Air training Plan.

The towns of Edson and Vulcan, Alberta and the city of Estevan, Saskatchewan were big centres for storage of these aircraft.

Tiger Moths, Fleet Finch, Fairchild Cornells, Cessna Cranes, Avro Ansons and North American Harvards, famous for their role in training pilots, navigators and air gunners of the Free World who would ultimately put the Nazi scourge into the ground, could be found awaiting the wrecker’s axe. For a few lucky aircraft, a sale at bargain basement prices to an air-minded public or the burgeoning aircraft industry would save them from destruction for a short time.

A Tiger Moth would sell for $400, as would a Fairchild Cornell and the Bamboo bomber. A Cessna Crane would go for $900. Some of these aircraft were in tiptop condition with two new engines and low time or zero time airframes.

Aircraft, with their spares, were sold by a government department called War Assets Disposal Corporation. This Crown Corporation achieved record sales of DC3s and other useful transport aircraft to developing nations and airlines in North America and Europe, but the domestic market got first divvies before the axe fell.

When the wreckers were finished at Victoria’s Patricia Bay airport, the grass between runways looked like a killing field for Canso Reconnaissance bombers, Curtis Kittyhawk fighters, Bristol Bolingbroke and Lockheed Ventura bombers.

Pilots and engineers, familiar with these types of aircraft and poignantly aware of the affection between man and machine, would turn away in disgust at sight of the carnage. But the scrap dealers prevailed and it is likely that a former pilot of a PBY flying boat might well boil his eggs in a pot made from his former proud aerial mount.

George Maud saw all this happening at Victoria’s Pat Bay air force base and just had to do something about it. He bought a P40 fighter for $50 and two Bolingbroke twin-engine bombers and rafted them over to his home on nearby Saltspring Island. In order to get the machines up the road to his farm, Maud had to remove the bombers’ wings, but he couldn’t get the P40s wings off and had to cut them off—a decision he later regretted when he bought another set of wings for the truncated fighter.

While the Bolingbroke aircraft have since gone to museums, Maud still has the P40, which now has a value of more than $800,000—not a bad investment for an airplane buff. However, the P40 is not for sale—Maud intends to take it with him when he leaves this mortal plain.

The commercial use of warplanes along B.C.’s coast was much in evidence during the early post-war years. Supermarine Stranraer flying boats were used to replace the too slow Union Steamship coastal packets. It was only later that they were deemed too slow for the logging industry and coastal communities.

Former service-owned DC3s were also used as commercial aircraft by both CPAir and Trans Canada Airlines during those years. One could fly between Vancouver and Victoria on a ‘3’ that had spent its war years flying the Hump—China-Burma-India—painted olive drab. This particular airplane would have the appearance of being a little embarrassed to be all dickied up in civilian livery, carrying passengers over sea-level Georgia Strait for something no more important than tea at the Empress Hotel.

When the smoke cleared, the only way these surviving warbirds could continue to be warbirds was to be owned by a select few who possessed wallets fat enough to be used as seat cushions.

A little maintenance operation at Victoria International has made a big name for itself refurbishing piston engine and jet fighters for those lawyers and doctors whose professional rate per hour matches or exceeds the price of fuel going through those two P&W J60-P6, 1,300-kilogram thrust engines located up front in their Buckeye jets.

Ultimately, it was the ever-increasing price of fuel along with the cost of maintenance and upkeep that put most warbirds out of action.

No doubt, commercial airline pilots will be relieved to know that there aren’t too many of these old fighter-trainers zinging around on Sunday afternoons.