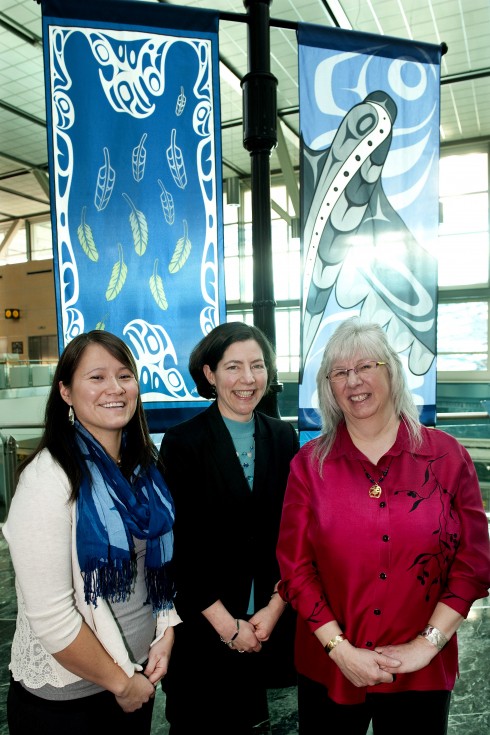 Michelle Stoney (left) from Hazelton and Valerie Malesku (right) from Queen Charlotte City are congratulated by Anne Murray (centre), vice president, community and environmental affairs at Vancouver Airport Authority and chair of the Board of Directors for YVR Art Foundation.

For many visitors, Vancouver International Airport (YVR) provides the first and last impression of British Columbia. The airport has long reflected the beauty of the province and its diverse landscape through unique architecture and design, as well as its world-renowned Northwest coast First Nations art collection. The commitment to capturing B.C.’s unique sense of place and cultural heritage inspired this first-ever street banner contest.

B.C. artists of First Nations origin were invited to participate, and 14 artists from across B.C. submitted original designs. In the end, two winners were chosen: Valerie Malesku, from Queen Charlotte City and Michelle Stoney from Hazelton.

Valerie Malesku is of Cree ancestry and has lived in Haida Gwaii for the past 40 years. Her art is inspired by many legendary Northwest coast artists including Captain Gold, Robert Davidson, Reg Davidson and Bill Reid—whose iconic sculpture The Jade Canoe resides in YVR’s International Terminal. Malesku has worked with many traditional styles of art including carving, button blankets and jewellery. Her banner design incorporates land, sea and sky with eagles in flight. Her work can be found in galleries around B.C. and has been displayed internationally as far away as New York.

Michelle Stoney became interested in art through her grandfather who is a master carver. Stoney, who is of Gitxsan ancestry, was first recognized by YVR Art Foundation for her artistic ability in 2001 as the recipient of a YVR Art Foundation scholarship. She pursued art full-time at Emily Carr University of Art and Design. During her time there, she learned how to meld contemporary art and new techniques with the traditional First Nations art she learnt from her grandfather. Stoney based her banner design on the ‘weget’ (a raven), a favourite character that can transform into anything. In her winning design, the weget is mid-transformation into a plane.

Valerie Malesku and Michelle Stoney’s banners were unveiled at a ceremony at YVR on December 4, 2012. 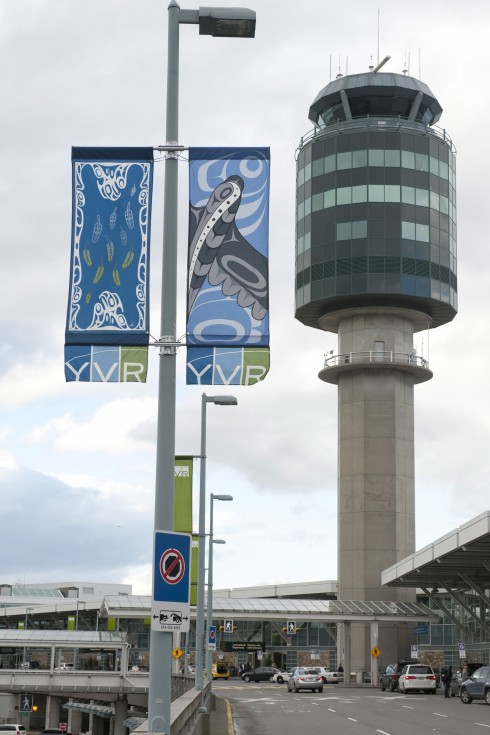 Millions of passengers travelling through YVR each year will enjoy these outstanding tributes to Northwest Coast art and aviation. Banners will hang along Grant McConachie Way, YVR’s departures and arrivals ramps and throughout airport’s parkade.