By admin on January 14, 2013 in Historical Features 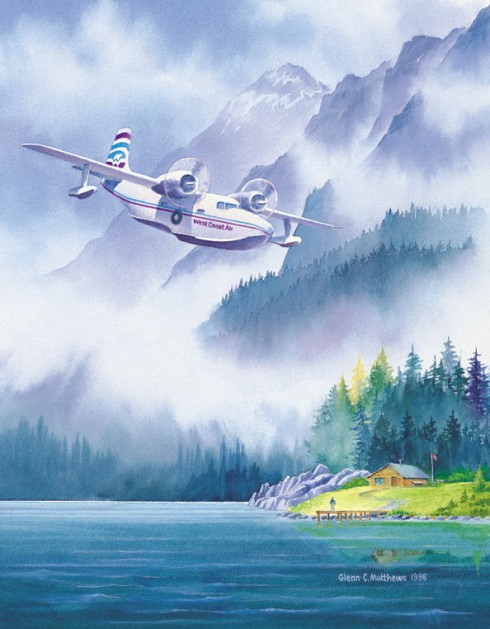 The painting by Glenn Matthews at Airport South, which depicts a Mallard flying boat in West Coast Air livery.

In a previous issue of SkyTalk, I recounted the history associated with one of the four paintings displayed on the mezzanine at YVR’s Airport South.

Here is another history associated with one of those paintings, which includes some of B.C.’s industrial history and the vital part played in that saga by VancouverAirport and the coastal airlines operating from there.

The painting at Airport South depicts a Mallard flying boat in West Coast Air livery landing at an unnamed destination to pick up passengers bound for Vancouver. The artist did not have personal experience with the various destinations of the Mallard during its 26 years of service on the coast, but his imagination created what coastal pilots will find reminiscent of the Cousins Inlet approach into one of the prime destinations in its day—Ocean Falls. Here a concrete slipway and ramp with a terminal building was built to handle this amphibious craft on its regular daily stop.

Interestingly, when I was researching information to write the Pacific Coastal Airlines, Daryl Smith story, published under the title Journey Log, I discovered that Smith had helped build the concrete slipway and ramp at OceanFalls, operating a bulldozer during onsite construction.

The pulp mill and community of OceanFalls was a vital stop for those flying boats from 1946 to 1970—before this coastal community descended from what had been the largest pulp mill in the province, with a community of 3,500 residents, to what is now a near-ghost town.

The Ocean Falls town site was first envisioned in 1903, when it was determined that a large block of hydro-electric power could be generated from the waters tumbling into the inlet from the 213-metre elevation of Link Lake above the proposed pulp mill site. By 1912, the pulp mill was in production and the town site boasted 250 inhabitants.

Transportation was provided by steamship service from Vancouver, which became a tedious experience for most of the workmen and their families, and a painfully slow means of transport for the mill operators.

When airplanes started to arrive, the owners of the pulp mill company Pacific Mills, along with many of its employees and residents of OceanFalls, helped to finance a little airline of their own called Pioneer Airways. This airline was run by a quite famous, local pilot named Bill McCluskey. 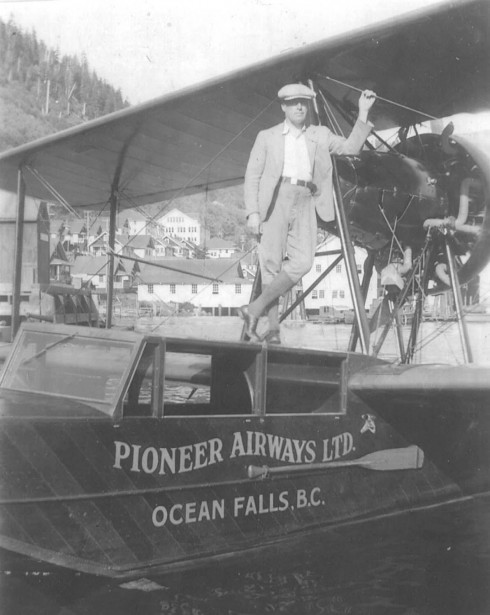 Pioneer Airways ordered two of these pusher configuration aircraft and the little upstart airline was launched.

The history of this airline is a story unto itself, but for the purposes of this account it can be said that the OceanFalls community became enthusiastic backers of coastal aviation, and the mill owners of the day were great contributors to the growth of B.C.’s flying industry.

By 1945, B.C. airlines initiated the use of the Mallard flying boats and developed scheduled service from Prince Rupert to Vancouver.

Pioneer Airways operated six of the Mallards during its heyday and proudly flew Princess Margaret on a tour of some coastal destinations in a Mallard during her tour of the province in the 1958 centennial year.

Grumman flying boats were passed on to Pacific Western Airlines, then to West Coast Air Services and then to AirBC in its history of linking the coastal communities of this province and though these fine aircraft are no longer in service in B.C., thanks to a pulp mill, this aircraft type played an important role in coastal aviation history.