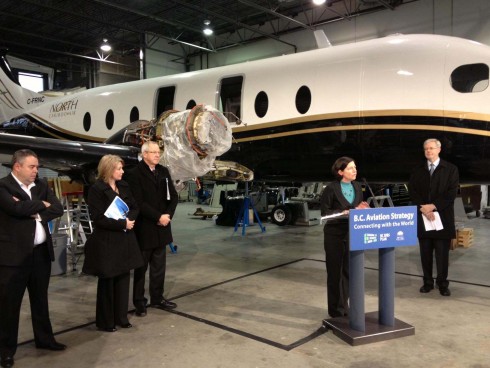 Opening and expanding international markets for British Columbia’s goods and services is one of the pillars of the BC Jobs Plan and as such, the government of B.C. has launched a Connecting with the World Aviation Strategy designed to help grow the B.C. economy, create jobs and increase investment in the province.

There are 38 certified airports in B.C. serving the passenger and cargo transportation needs of the province. In total, more than 300 airports, heliports and water aerodromes, together with airlines, aerospace companies and their supporting industries, make up B.C.’s aviation sector. The sector promotes local economies by increasing access to remote job sites for B.C. workers and supporting access to local tourist destinations. It also plays a key role in every region of the province by supporting emergency services, such as medevac and firefighting.

Every community in B.C. is expected to benefit from new job opportunities in the aviation sector, expanded air services and increased access to international markets. This would increase B.C.’s competitiveness in the international marketplace and open up new markets, which will bring more business into the province and affect every sector of the economy, including tourism, oil, natural gas, mining and international education, to name a few.

Earlier this year, the B.C. government eliminated the jet fuel tax for international flights, providing greater financial certainty for airlines, allowing them to invest in expansion and saving thousands of dollars per day on long-haul flights. This change increases B.C.’s competitiveness and brings the province in line with the neighbouring jurisdictions of Alberta, Washington and California, which do not have a comparable fuel tax.

One of the major employers at Langley Regional Airport, where the new aviation strategy was announced, is Vector Aerospace, which employs more than 100 employees who provide maintenance, repair and overhaul services for helicopters. Vector has announced plans to expand its facilities and add another 80 jobs to its workforce as a result of the announcement.

The B.C. government has invested $65.5-million to improve 36 airports throughout the province in the past decade, including significant projects in Prince George, Kamloops, Cranbrook, Campbell River, Comox, Castlegar, Kelowna, Abbotsford and Langley.